The President of the Catalan Government, Artur Mas, recognizes the work of Constructora Calaf in its 50th Anniversary 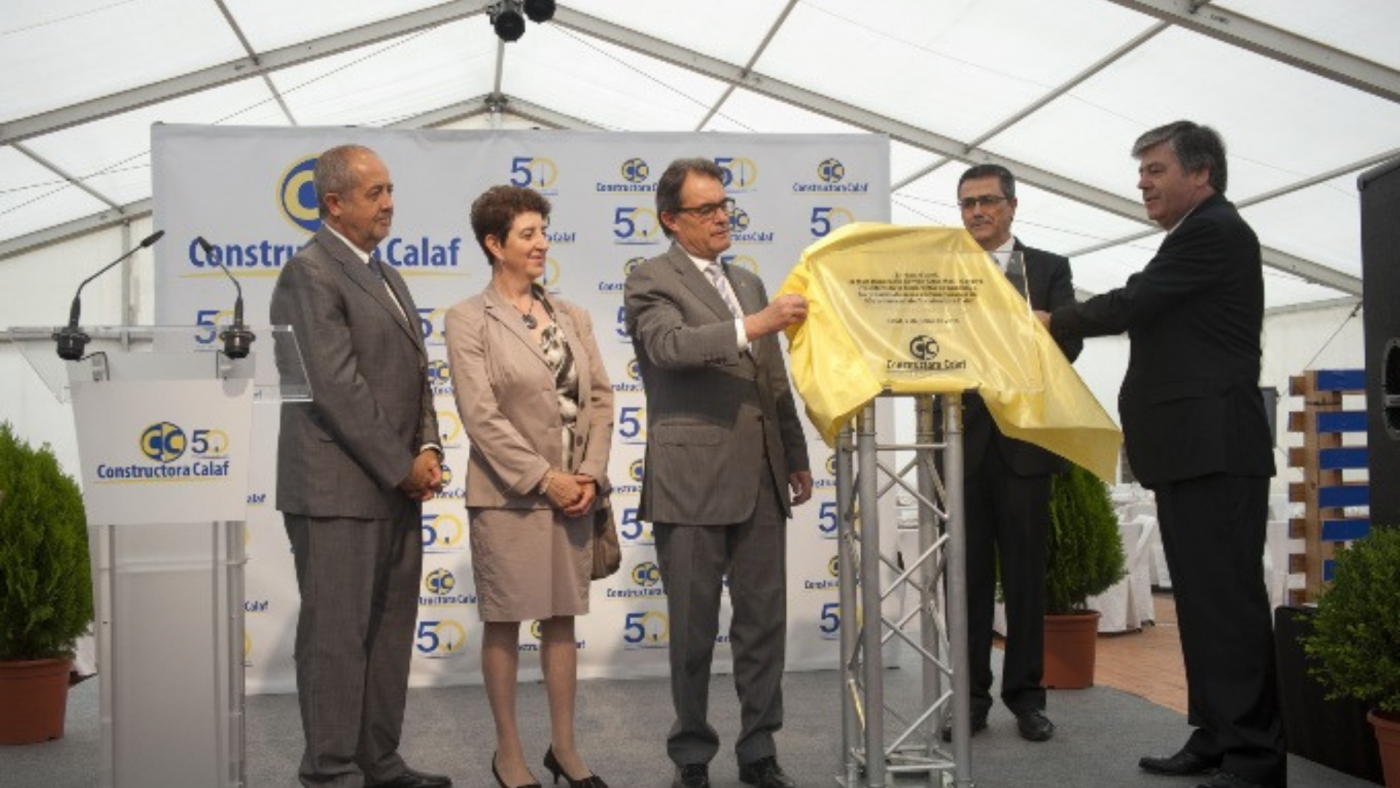 It's been half a century since that March 21, 1964, when Constructora Calaf was established. Over the years this small construction company that performed works in their immediate area has become a business group of about 230 workers, has initiated a process towards internationalization and diversification. The company wanted to celebrate the achievement of this milestone with two festive days. The last celebration -which took place on Wednesday 2 July- was chaired by the President of the Generalitat, Artur Mas, who was accompanied by the Minister for Enterprise and Employment Felip Puig; the Government Delegate in central Catalonia, Juli Gendrau, the Mayor of Calaf, Ma. Antonia Trullàs, among other mayors and elected representatives of the territory, as well as a large representation of the clients of the company and representatives of civil society.

The President of the Generalitat reached o'clock noon at the headquarters of Construction Calaf, Manresa on the road 50-60, where he was received by the presidents of the company, and Josep Maria Xavier Pujol, and where he signed the book of honor. He then toured the facilities of the group, through which he could see first hand the activities being carried out, as well as future projects with which you are working. After the visit went to the tent located outside the premises of the Isaac Newton Street, where they subsequently conducted the memorial lunch.

During his speech, he noted the efforts of companies like Constructora Calaf "a solid track record," which had to overcome the difficulties of a sector hit hard by the recession, and praised the fact that they had 'adapted to the new situation and have been reinvented to get ahead, exploring new grounds such as internationalization. "President recalled that the institutions and the private sector play a key role in economically revive the country and said it was important to celebrate 50-year history of a company, but it was more important to look forward and work together to lift the country.

For his part, Mayor Antonia Maria Calaf Trullàs congratulated the company and highlighted its role in the generation of wealth for the town. Also emphasized the human factor Construction Calaf, he said, "is the fundamental value."

Before the start of the meal a plaque commemorating the 50th anniversary of the company was found, and then began the meal, during which they held the rest of parliaments.

The Minister for Enterprise and Employment, Felip Puig, stressed the commitment of the company-and the Pujol family in particular with the territory, and its willingness to move forward despite difficulties' commitment and values ??that have passed from generation to generation, they are very much alive today and predict their future success'.

The company president, Josep Maria Pujol, welcomed the attendance of each and wanted to highlight the importance of customers and employees that the company has: "what it takes for a business to succeed is the workers and customers", "we must not forget that without customers, everything else is useless.'' Pujol also said he was convinced that "if we got here, it is because over the years we have worked to make things right. Sure we've been mistaken at times, but what I can say is that we have tried to do things honestly and always keeping our values ??of: respect for persons, keep our word and a job well done".

Meanwhile the CEO of Calaf Grup, Ramon Peñaranda, spoke of the process of change, where the company had spent in recent years to cope with the new market reality. So referred to who had chosen to diversify the business, relying heavily on the industrial sector in order to reduce dependence on public works, and that began a process of internationalization. Peñaranda said that this was a process that took many risks, being carried out in a prudent, progressive and adapted to the possibilities of the company, and which aimed to diversify cycles, contribute to the stability of the group and expand the mind and flexibility of the company.

Finally, representatives of the third generation, built-in management in recent years, Miriam, Joan and Jordi Pujol, said they feel 'proud and honored' to be "part of a Company with such a good name" which has been earned with hard work and a job well done first by their grandfather, then their parents and all the people who daily stand up for Constructora Calaf. "We feel a great responsibility to ensure that what has created our grandfather and our parents never loses its essence '.
As for the future, the representatives of the third generation of Pujol said that 'regardless of size, we want a company like we have, that strives to do the job, that collaborates with its customers, that respects people (both workers and collaborators), to ensure everyone's safety and the care for the environment where we work. A socially responsible and ethical company, above all '. They concluded: 'We're not sure how the future will be, but we can say that we have the necessary ingredients to take forward many more years for our company to remain a benchmark for commitment and seriousness. And these ingredients are: values ??and people'.

A few days before the institutional party, Constructora Calaf wanted to share the celebration of his 50 years with the workers who are part of the workforce today, also with those retired workers with greater experience within the company and their families. A total of about 500 people participated in the festive day last Saturday, June 28.

The day began with an open day to visit the company's facilities. For the occasion a tour was enabled by the various departments and could be seen some operating machinery. Subsequently, a megafoto with all five hundred attendees was taken, and then an anniversary cocktail was served.

During the meal a plaque was given to all employees who have completed 20 years in the business and an acknowledgment was also made to those who had received this badge in the 40-years celebration, 10 years ago.